[Editor's Note:  Today this blog is hosting its first cougar.  I'm not a big fan of cats or feline animals in general, but...  What?  Oh?  Not THAT kind of cougar?  What other kind of cougar is there? Oh.  THAT kind of cougar.  Rawr.  How YOU doin'? Anyhow, our guest's name is Denmother, and she's here representing the Cougar Den.  She's here to tell you a story that may or may not be true, but that doesn't matter.  It's funny.  THAT'S what matters.   As always, head on over to our guest's blog and hit the almighty follow button after you've read Denmother's hilarious words here.] I first saw Twindaddy across a crowded "like" section at the bottom of a blog.  It was something about his petite stature and freakish suit that first caught my roaming eye.  What kind of person puts himself out there so honestly?  I distinctly remember thinking, wow, this guy covered in metal, ammo and holding not one but two guns is so raw, so transparent, and only slightly disturbing to look at.

I felt like I wanted to know more but was unsure of my approach.  I know that sounds crazy coming from a cougar, but this guy was wearing body armor.  Even for my kind that posed a challenge.  Undeterred, I decided to go for the obvious and meet him at his level.  Relate to him, if you will.

If memory serves me correctly, “Hey daddy, I’m a twin” was my first ever comment to him on a post of his about being a hemorrhoid sufferer.  I actually wanted to tell him to think about losing the metal pants if he really wanted to manage the problem, but I thought that might be too familiar, too soon.

And you know, I’m glad I took the approach I did.  Twindaddy connected almost instantly, guns firing erratically in all directions, falling over himself through a series of replies about his name having to do with actually having twin boys and being a proper daddy, not THAT kind of daddy. 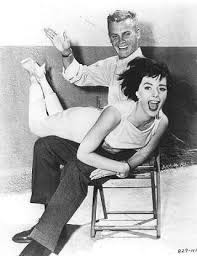 I still don’t know how he managed to type his replies so fast and furious in those damn gloves, but that’s just one more of his endearing qualities.  I was won over.

Thank you, Twindaddy, for inviting me to share this story, and for Stuphblog, a safe space in which to literally or figuratively remove our armor, expose ourselves and discover others.

45 Comments on How I Met Your Twindaddy