I’m running out of things to discuss. I’ve already regurgitated a couple of posts from my old blog this month and it’s only the 15th. So I’m sort of mailing it in today. It’s a Q&A!! Thanks to Molly for finding all these questions! (By the by…if you’re not already following Molly get your ass over there and click the follow button. You don’t want to miss what she has to say.)

Do you sleep with your closet doors open or closed?

Open, because my closet door is a pain in the ass to open and close. So I just take the path of least resistance…

Do you take the shampoos and conditioner bottles from hotel?

No. It’s a pain in the ass to use those things.

Do you sleep with your sheets tucked in or out?

Out. To be honest, the only sheet on my bed is the fitted sheet. I just sleep under my comforter because sleeping under a comforter and a sheet just gets me all tangled up and then I fall out of my bed when I try to get up in the morning.

Not a sign, but I did steal an entire road construction barrel once because I wanted the flashing orange light (which was bolted to the barrel) on the top of it.

I don’t really feel any particular way about them, but I use them to label all the broken shit in my office at work because I’d forget whose is what and what is wrong to all that shit otherwise.

Would you rather be attacked by a big bear or a swarm of bees?

Why would I want either? Right now I’m drinking my coffee and all I want is for my cup to refill itself.

Do you always smile for pictures?

If I can avoid having my picture taken I do so. If not, then I try to smile so I at least look like I’m not some grumpy asshole, even if I am.

What is your biggest pet peeve?

Jesus, I can’t narrow it down to just one. Right now, the thing bothering my most, though, is that I can’t pick one pet peeve that pisses me off more than the rest. And now I’m irritated. Dammit.

Have you ever peed in the woods?

Of course. Almost every house I grew up in had woods beyond the back yard. I spent much of my childhood roaming through trees (and in them), and I sure wasn’t going to head home just to pee.

What about pooped in the woods?

Hmmm…I think I might draw the line there. I don’t recall ever doing that, because pooping without wiping is just ewwwwwwwwwww…

Do you ever dance even if there’s no music playing?

I’m sure I have, but it’s not something I typically do.

Do you chew your pens and pencils?

What is your song of the week?

What a curiously timed question. I already spoke about that this week.

There are too many from which to choose, so I’ll just pick the movie I couldn’t even sit through one time. Toys. I left the theater about 30 minutes into that horrible movie.

Where would you bury hidden treasure if you had some?

Why would I bury it? I’m not a dog or a pirate…

What do you dip a chicken nugget in?

Depends on my mood. More than likely it would be Frank’s Red Hot, but sometimes I’m in the mood for BBQ sauce or spicy mustard.

What movies could you watch over and over and still love?

There are plenty, but I’ll go ahead and list the movies I’ve watched the most and still love, and that is every Star Wars movie. Duh.

Were you ever a boy/girl scout?

Would you ever strip or pose nude in a magazine?

Um, no. Who would want to see that?

When was the last time you wrote a letter to someone on paper?

About three years ago as an assignment from a marriage counselor. That worked out well, obviously.

Can you change the oil on a car?

I can change the oil in a car, yes. If the oil is on the car you shouldn’t change it; you should just wipe it off.

Ever gotten a speeding ticket?

Oh, yeah, *crosses fingers* It’s been a long time, though. Almost lost my license a couple of times in my late teens.

Ever ran out of gas?

One time that I can think of. That was the suck.

What is your usual bedtime?

On work nights, about 10. On weekends, whenever I get tired.

I was born in the Year of the Snake, but if you’re asking what my normal sign is it’s Gemini.

How many languages can you speak?

Just English. I took three years of Spanish in high school, but since I didn’t know anyone else who spoke it I’ve lost it all.

Do you have any magazine subscriptions?

Pfft, no. Everything I want to learn I can find online for free.

Which are better, legos or Lincoln logs?

Who is better, Leno or Letterman?

Sadly, there was a time in my early teens when I did. *hangs head in shame* But now I can’t stand them. I don’t do drama.

Are you afraid of heights?

Do you sing in the car?

Are you kidding me? I rock that shit.

Do you sing in the shower?

Are you kidding me? I rock that shit.

Do you dance in the car?

Um, no. I try not smash my car into other motorists.

Ever used a gun?

Do you think musicals are cheesy?

Yes! I mean, who the fuck just breaks out to song at random moments? I have never conversed in song before. It makes no sense to me.

Not to me. I think people make it stressful. I think too many people get so caught up on finding the perfect gift and forget what the holidays are truly about, which is giving and spending time with your loved ones. And egg nog.

Ever eat a pierogi?

Pumpkin. Is pumpkin a fruit? I don’t even care. That’s still my answer.

Occupations you wanted to be when you were a kid?

Baseball player. Then later in high school, a math teacher.

Do you believe in ghosts?

I’m unsure. I mean, I’ve heard some very convincing stories, but I’ve never heard or seen anything that made me truly believe.

Some oldies concert my dad took me to at Fulton County stadium when I was a kid.

Nope, but I regularly burn dinner. Does that count?

I’m honestly not much of a live music fan. Of all the bands I’m really into that I haven’t seen, though, I’d have to say Seether would top that list.

What was the last concert you saw?

Depends on who and what the situation is. I’m much more patient now than I have ever been before, though, so I guess age is calming me down.

Which are better, black or green olives?

I love them both. YOU CAN’T MAKE ME CHOOSE!

Can you knit or crochet?

Why would I do that?

Best room for a fireplace? 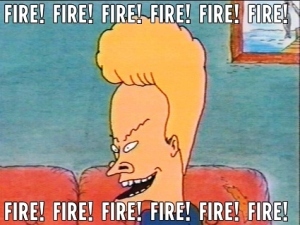 Who was your HS crush?

Well, I won’t say her name here, but she was amazing. Now she’s extremely religious, so obviously that worked out for the best.

Do you cry and throw a fit until you get your own way?

No. I get pissed. Rant. Maybe drink. Then move on.

Do you have kids?

All three of them.

Do you want kids?

Well, I want the ones I already have. I don’t want any more, though. I love them dearly, but they are more than enough to handle.

Either red or black.

Do you miss anyone right now?

Are you participating in NaBloPoMo? Do you want an easy post idea? Are you going to steal these questions and make them your own?