We’re less than a week away from Halloween! If you had to design a costume that channeled your true, innermost self, what would that costume look like? Would you dare to wear it?

Today’s Daily Post prompt is curiously timed. Not more than two weeks ago I literally took the mask off of my blogging identity. Had I thought it through a bit more I suppose I should have had some big build up to it and revealed my true self on Halloween, like some genius writer I know.

In January of 2011, I launched Stuphblog to little fanfare. Frankly, I’m not even sure I was excited about it. I was two weeks away from becoming the father of a third child and blogging was really just a way to kill time while I was at work.

I knew at that time I was going to blog anonymously, and choose the moniker Twindaddy with which to represent myself online. That was a name I embraced long ago in the days of Yahoo chatrooms and AIM, inspired by the fact that I’m a very proud father of twins. And without much forethought, I chose a stormtrooper as my gravatar because Star Wars. Eventually, one particular blogger addressed me as a stormtrooper and not a blogger, and that’s when I began to embrace the role of being a stormtrooper online, figuring it added a bit of intrigue to my online persona. Which it did. 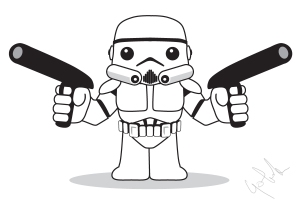 Twindaddy, as depicted by Goldfish, whose art you should check out and purchase.

Removing my virtual mask is something I struggled with for years. My anonymity was important to me in some ways, but a hindrance in others. For instance, my dear Rara at one point submitted my work to an online publication, but it was rejected because they wanted a name to attach to any pieces they published. Evidently, they didn’t believe Twindaddy was an actual name. Philistines. At any rate, I was unwilling to remove my helmet at that time.

Last year, when I began fundraising for AFSP, my anonymity came into question. AFSP does not allow you to raise funds anonymously and I risked people finding my true identity by linking my anonymous blog to my personal fundraising campaign. I did it anyway, figuring people would hopefully assume that Scott was some other dude, and not a man hiding behind a stormtrooper mask online.

Things have changed in the past year.

I now know that depression is something I’m stuck with for the rest of my days. My doctor at one time believed my depression was situational, catalyzed by my impending divorce. He dismissed me when I told him I had been diagnosed as manic-depressive when I was 13, and assured me that the things I was suffering were typical of someone going through a divorce. He told me that he wanted me to come off the Prozac he had prescribed me in one year’s time.

When my prescription ran out one year later, I stopped taking the pills, obviously, since I didn’t have any more. It was a disaster, to say the very least. After many hurdles, I was able to get back to my doctor and he put me back on Prozac.

I realized at that point that I should probably stop hiding my diagnosis from the people I know in real life. I had blogged extensively about my depression from behind the mask, but perhaps only one or two people I actually know outside of the blogging community knew my troubles and read my blog. So I decided to take the plunge and remove the mask. I shut down my old blog so I could start afresh. I figured I could do my small part to help remove the stigma from mental illness and get people talking about it. The less afraid we are to talk about mental illness the more willing people will be to seek treatment for it, and that benefits everyone.

Plus, I figured blogging transparently might help me eventually get published somewhere. Hey, you never know.

So here I am, without the mask. The costume of my true self is that of a 37-year-old man with 14-year-old twin boys and a 3-year-old toddler, who suffers from depression and has been divorced twice because he makes idiotic decisions because he listens to his heart instead of his brain. But at least I have a sense of humor about it.

Does my costume frighten you?

52 Comments on My Transparent Costume